Posted by avidcreative | May 15, 2015 | Reference, Restaurateur Resource | No Comments

In this post I list some superb examples of creative, modern and unique marketing methods used for restaurants and f&b products — ones that get noticed. If your looking to produce a unique marketing campaign for your restaurant or product, let’s hope these examples will spice up your creative juices. Let’s dive in!!!

Who came up with the genius concept of having a masked Luchador literally carry you to your destination?!?! And what this has to do with a chocolate bar that it is promoting? Absolutely nothing. But it did turn heads both on the street and online. Getting a lot of coverage purely on the fact that it was an outside-of-the-box concept.

I have to say this idea proves that a lot of modern day promotion and marketing, when the campaign has almost nothing to do with the actual product or restaurant can be successful. 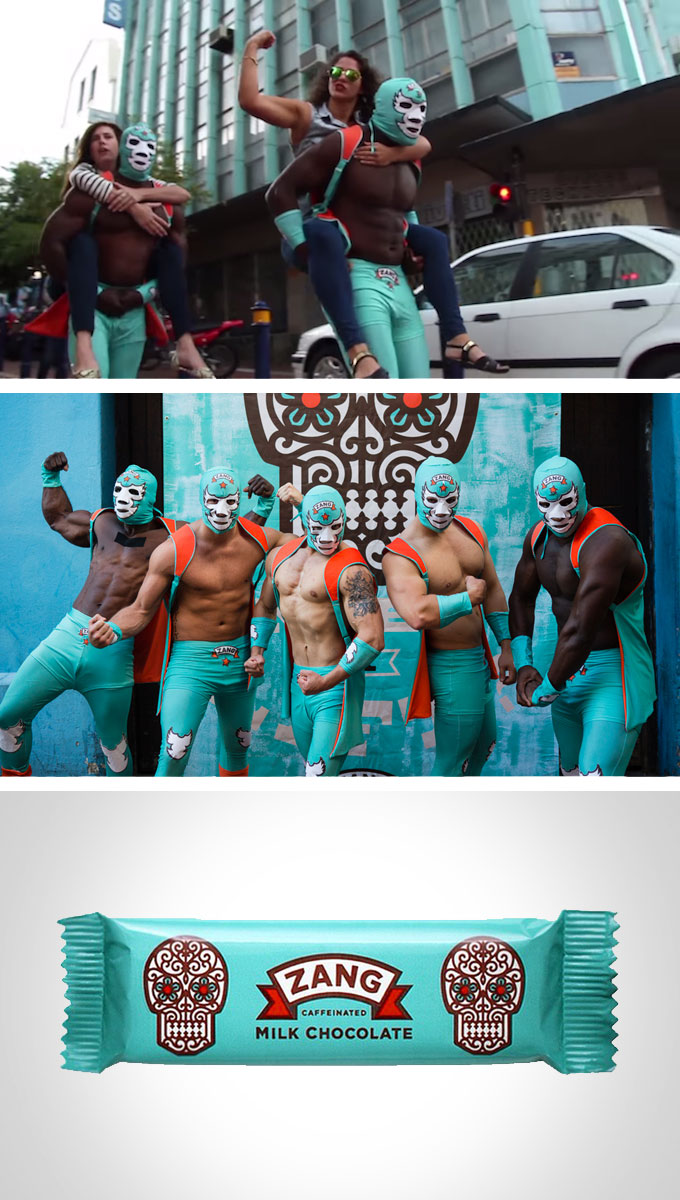 Giveaways are very common and have been around for decades. Although something becoming ever so popular is participation of your customer. In the case of Tim Horton’s one must buy a coffee to roll up their rim, so it encourages and increases sales along with engaging the customer to physically roll up the rim, which heightens excitement and endorphins — a great marketing device. 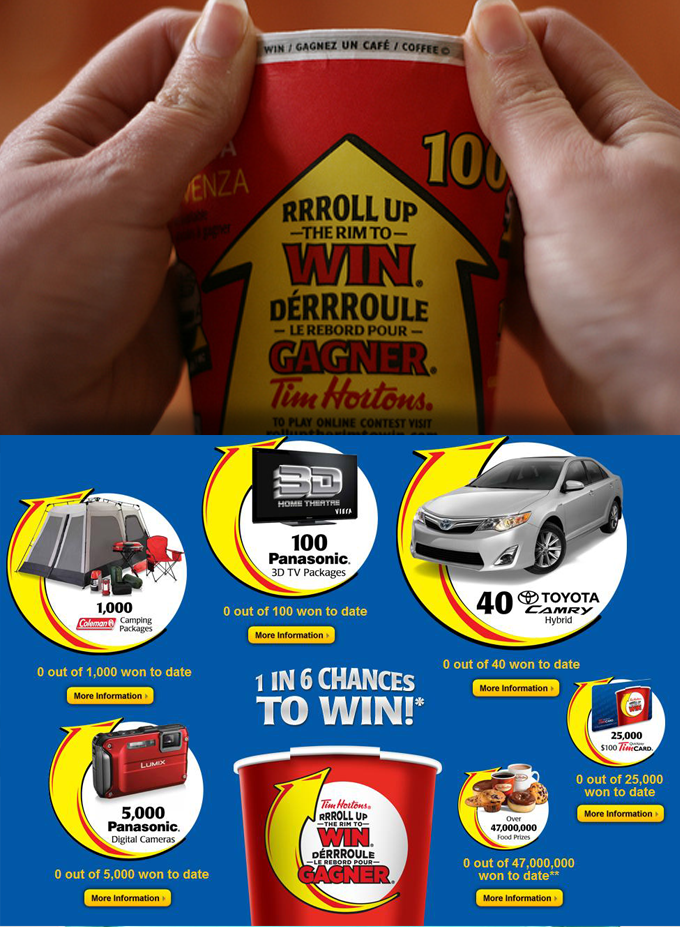 In current day, analytics can tell you if your promotions are doing well or not as well and are a lot more precise with all the nic-nac’s and doodad’s that give you precise numbers on your campaigns — so be sure to take special care and keep track of your campaigns. And don’t forget to be sure to be precise about your fine print when producing a promotion or marketing campaign.

3. Social Media Marketing – This is a big one.

Of course giveaways are very common with franchise restaurants, but when there is limited budget, there is a need to have a little more creativity and most of the time we turn to social media. As most of us know social media has dominated restaurant marketing in the past decade and isn’t going anywhere, anytime soon.

With most of social media comes hashtags and tagging, liking and a whole lot of sharing. This will get people to not only find your content but produce more of it. Social media campaigns are effective; having great potential to mass audience reach and really doesn’t take much mulla to produce.

Let us have a look at SweetGreen and their #SweetLife2015 hashtag gaining a following of over 55+ thousand on Instagram. SweetGreen — If you haven’t heard about it, is a health conscious and eco-friendly restaurant with organic and all-natural menu items. Their overall goal is to help influence their customers to live healthier lifestyles steering away from the ‘being green’ fad to a standard way of living. They wanted awareness and they did so by launching the SweetLife festival. Starting out in a parking lot behind their second location. The festival has grown to 25 artists and 22 hours of music over a 2 day span. Talk about promotion. The restaurant has grown tremendously since its launch in 2007 as well, this may have a lot to do with their combining great food and great music. 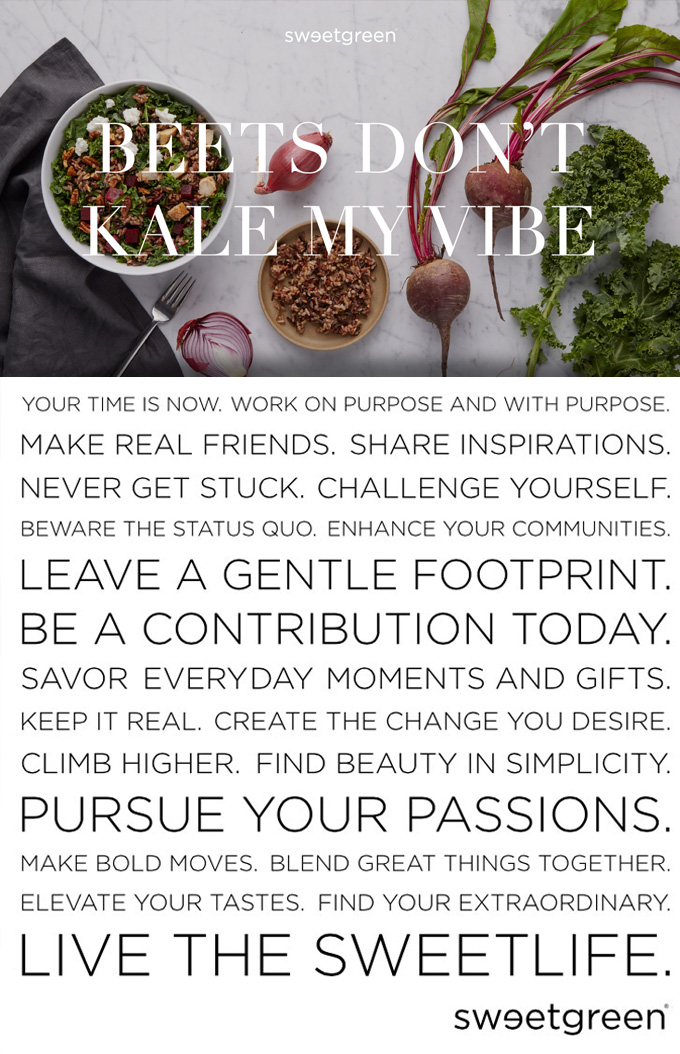 SweetGreen is also a great example of superb branding.

Last year there was a great campaign that ran using social media as a driver for it’s success. As stated ‘Tourism Australia created an online repository of country’s restaurants via its new campaign’. Since the launch of the campaign, there are over 2,200 tweets with the #restaurantaustralia hashtag, over 7.7 million impressions, and over 1,500 Instagram photos.’ Making it an online success.

Another great example is the night Arby’s took over twitter with a simple 9 word liner. Simple yet effective with a whopping 80,000+ retweets. A true example of random viral content but also shows that social media content is about timing and wit. 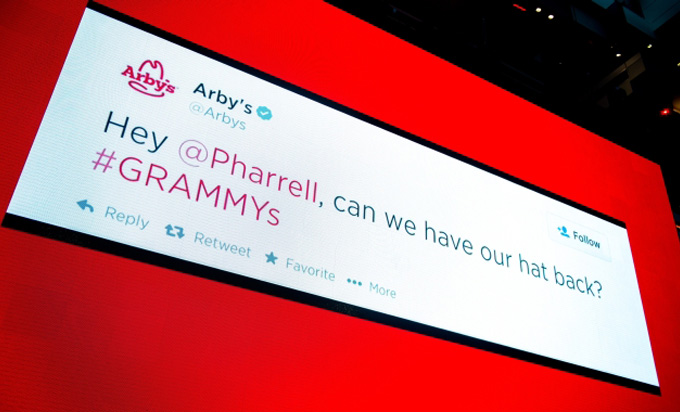 So again with social media success, there is just a little creativity and a plan.

Videos are considered one of the top marketing methods to gain recognition and coverage. The number of hours people are watching on YouTube is up 50% year over year and over 4 billion videos are viewed a day.  So I can confidently say that it is worth the time and budget making a video.

My favourite recent promotional video is on the Open Table brand. So great. Something like this doesn’t nessisarily need a huge budget, but some good camera equipment and a few days work. Check it out here:

For a quick and budget friendly video, produce a Vine can work very well.

The power of promotion through a 6.5 second video is actually a lot more effective than one might think. They are quick easy to make. There is no need for eccentric HD cameras or high end lighting or makeup. Unless you choose to for your 6.5 seconds of fame. Of course the hard part is coming up with something that will have minimal frames and getting your point across in that time frame.

Some pointers; tell a story, think simple and less is more, have fun and remember they continually loop, be sure to have good lighting, a good focus and if your footage is in one direction consider a stand or holder for your camera/phone lastly, have a genre, like comedy, artsy, informative, or random.

Infographics have become ever so popular in our social media world although they have been around for ages commonly showing wether focasts and maps. To put it simply inforgaphics are graphic visuals representing data or information graphically.

In the world of f&b infographics have become mainstream particularly on Pinterest, allowing for an image with a lot of height to be showcased well. As of 2012 there are 18 million users on Pinterest. This is a huge marketing opportunity. To share images and great information about any restaurant or restaurant related information. 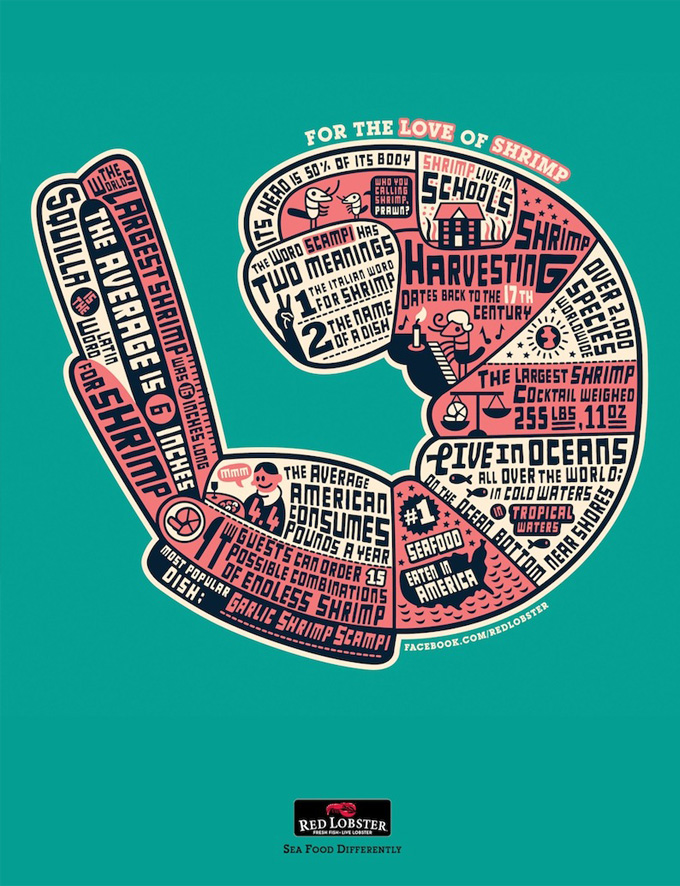 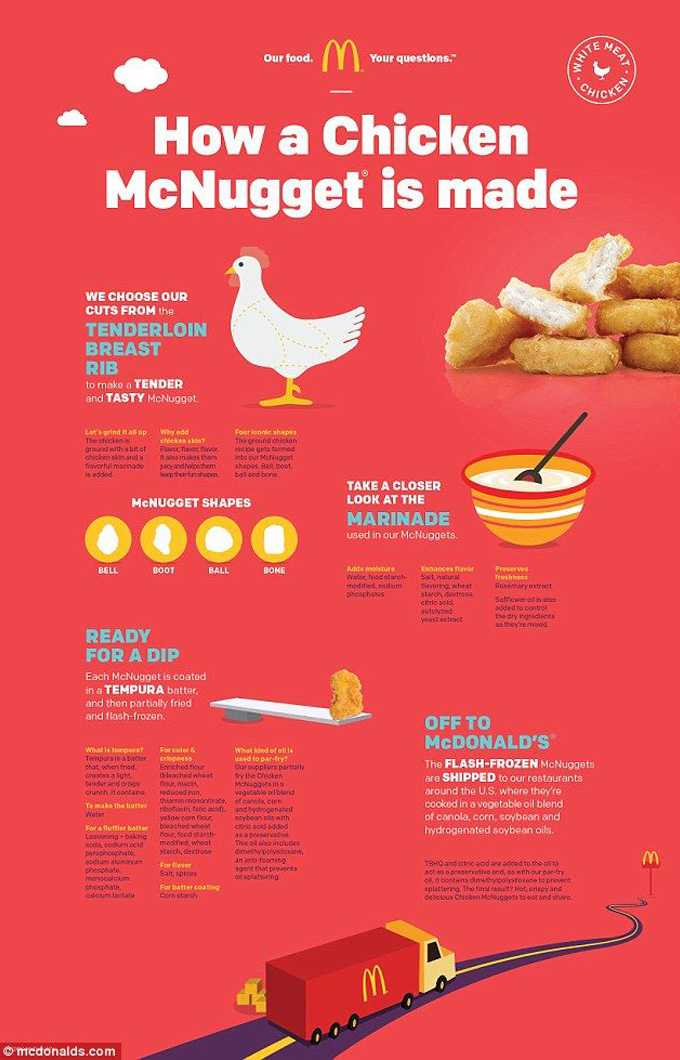 Examples of customer engagement has probably been one of the biggest changes in marketing over the past decade. Get your audience to participate, subscribe, like or comment increases brand recognition; which is mostly great for up-and-coming restaurants.

Sobeys engages it’s customers; every few months they launch the the #BetterFoodForLife Campaign with Jamie Oliver in line with a giveaway. Customers share their recipes or stories while using the hashtag to enter. 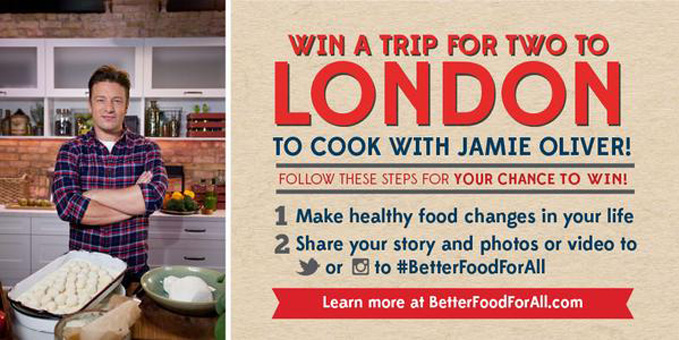 Another example of simple customer engagement is recognizing a customers achievement, or in the case of Holy Chuck’s their non achievement with their ‘Go Chuck Yourself Challenge’. If you eat the whole ‘Go Chuck Yourself’ burger you get posted on wall of fame and if you don’t you get put on the wall of shame. This may not be a very new marketing device but ‘if it ain’t broke, don’t fix it’.

Another successful marketing campaign that gained a huge overtaking was the Corona Light ‘Most Liked’ Campaign. People who like Corona Light on Facebook will be invited to upload their photo to a 40-foot tall digital billboard for all of Times Square to see. There was a 6000% increase in Facebook likes! 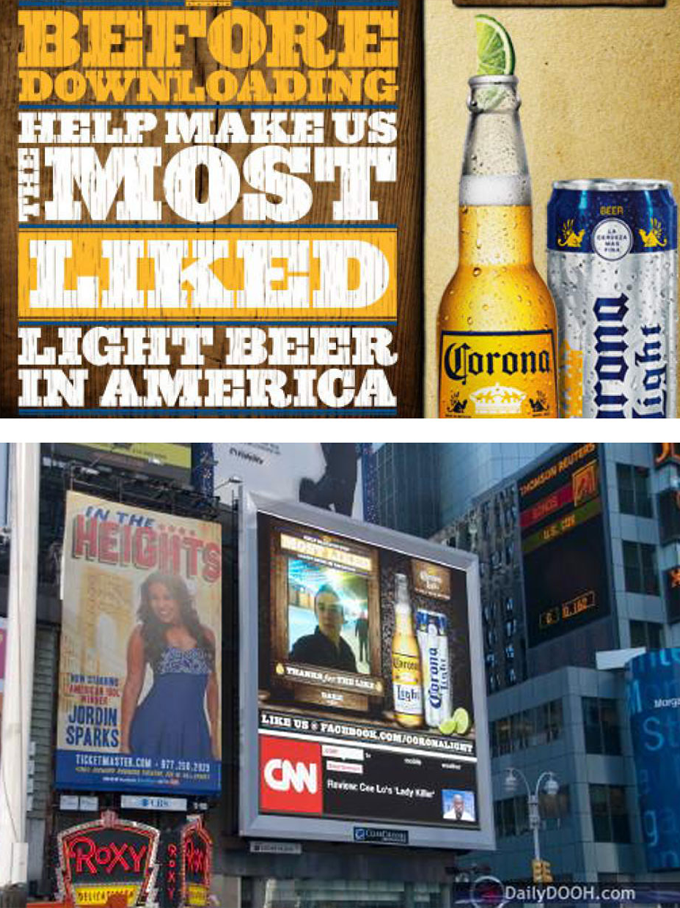 Following a theme or concept for your website may stir the pot and get people talking if it is done well.

For example; Senador Volstead Beer has made their website to a mock teddy bear website. While being quite the contrary, it is a spin on trying to hide what it actually is — selling beer. Perfect for an alcoholic beverage that was launched during the prohibition. I think it is quite unique; and genius!

Regarding Apps: Some may say creating an app may a bit of an undertaking, which is true but if you have the budget and resources to do it, by all means!

Producing apps are also a common marketing direction for some larger chains and or franchises to drive sales. Restaurant apps that dominate the restaurant market are generally rating apps like Yelp, OpenTable, Foursquare, Urban Spoon, Zagat, and the list goes on. Although having an app specific to your restaurant can show a leader in the market and especially impressive if your restaurant is planning to grow. Pizza apps seem to be at the top of the list because it is easy to redeliver/reorder through an app, including Domino’s and PizzaHut.

One thing I walked away learning from this post is the term ‘Guerrilla Marketing’ originally began as a form of creative advertising with little to no budget. But of course today you will see forms of Guerrilla Marketing used by major corporations that have much larger bankbooks.

Let’s not forget about common marketing devices like ‘frequent buyers’ cards/programs, public participation, donations/proceeds go to a charity, follow/tweet to win, point systems and sign up to win and so on. Although common; they are very effective. But keep in mind, putting these devices into play involves research, promotion, engagement and a whole lot of advertising.

I will leave you with this, it does not take a expensive marketing consultants to make a good idea come to life. With some brainstorming and open mindedness, your next marketing attempt may go viral – as some last minute genius ideas do. If you want to have a brainstorming session together, or need help planning a creative marketing plan — please don’t hesitate to get in touch!

Why your restaurant should use Vine via Food Fanatics

I apologize my posts have been sparse as of late, but I have hopped back onto the blog post wagon again and have some great posts in the works, so keep reading. Enjoy!

Why Restaurateurs Should Hire Freelance Designers